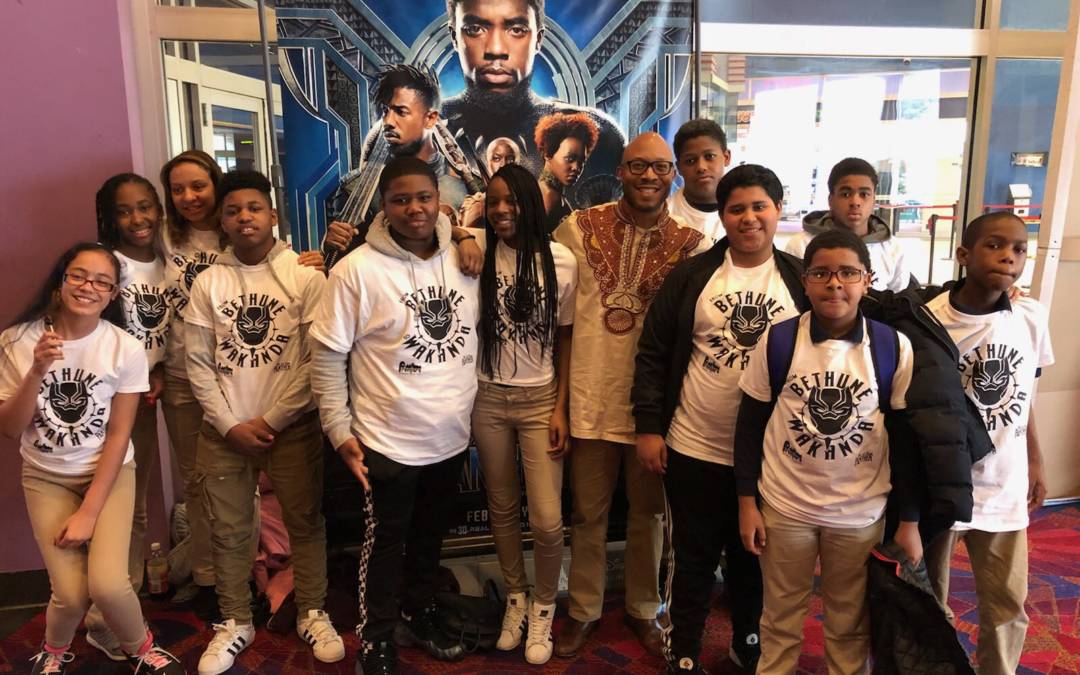 Students of Mary McLeod Bethune Elementary School (3301 Old York Road) were so excited when they found out they would be going to see the blockbuster Marvel movie, Black Panther!

The school’s principal, Jamina Clay-Dingle, wanted to raise money to cover the cost of transportation for the students, many of whom live in areas affected by poverty. She created a GoFundMe campaign to raise $1,250 for buses to take the 5th through 8th graders to the movie.

“The students said it was great to see an African American featured in a Marvel Comic book. They were also excited about the technological advances and how warfare translated into power,” shared Herman Douglas, a 7th grade ELA teacher at Bethune who escorted the 273 students to the movie viewing. He said that, for him, the movie reminded him of Marcus Garvey, Malcolm X, and Dr. Martin Luther King, Jr., and their commitment to empowerment and giving back to their communities. He noted that they also received a donation of over 300 T-shirts for the students and parents to wear to the event.

After sharing the fundraiser information with the North10 team, Michelle Taylor, Director of Community Partnerships & Strategy, took to social media to spread the word and solicit donations. Within an hour, the goal had not only been met, but surpassed by more than double! Clay-Dingle announced, via the GoFundMe page, that because of the success of the fundraiser, the 4th grade students would also be able to attend.

Bethune Elementary, a school where 31% if the teachers are Black men (!!), is raising money to get buses to take their kids to see Black Panther. Do your thing Twitter!! Donate here if you can spare https://t.co/rDOdbZwggx

YOU DID IT OMG THANK YOU SO MUCHHHHHH

I know the 4th graders are going to FLIP when they find out they, too, can go to the movie!!! pic.twitter.com/tEVUQ9lh0p

North10 is happy to support Principal Dingle and the staff at Bethune Elementary in increasing access to opportunities like these. We look forward to working with the school and other organizations and groups in Hunting Park and East Tioga on achieving similar goals.